The SNOO Smart Sleeper and the Graco Snese2Snooze are two of the most popular smart bassinets this year. They each offer a variety of features and benefits that will suit new parents with different goals and expectations – as well as different budgets.

If you’re on the market for a smart bassinet you may already have come across, or heard about the SNOO, a.k.a. The $1400 bassinet! The SNOO is the Cadillac of bassinets, considered by many as the best of the best.

The Graco Sense2Snooze is the simpler, yet overachieving cousin of the SNOO. It offers a ton of features for a fraction of the price.

Let’s take a look at how the SNOO and the Sense2Snooze compare head-to-head.

How does the Graco Sense2Snooze bassinet work

Graco is an established baby product manufacturer that has been making quality baby products for decades. Graco invented the first automatic baby swing in 1955 so they know a thing or two about soothing babies. The Sense2Snooze is Graco’s answer to the smart bassinet movement.

The Graco smart bassinet has 3 soothing motion speeds, 2 vibrations speed as well as a bunch of soothing sounds built into its control system.

What sets the Graco Sense2Snooze apart from other bassinets in its price range is the fact that it comes with a cry detection feature built right in. This means that when your baby starts to cry, the Sense2Snooze will automatically start moving and playing sounds to soothe your little one back to sleep. Pretty neat for a bassinet is actually very affordable.

Like most standard bassinets today, the Sense2Snooze comes with mesh sidewalls which is perfect for breathability and visibility. It also has a storage shelf for all your baby accessories as well as a cozy, removable canopy and a super easy-to-use control panel.

All in all, the Grace Sense2Snooze delivers premium features for a very fair price.

How does the SNOO smart sleeper work

The Happiest Baby’s SNOO is hands-down THE most advanced smart bassinet in the world. The SNOO was developed by the famous pediatrician Dr. Harvey Karp who specializes in infant sleep. Dr. Karp wrote the best-selling book “The Happiest Baby On The Block” where he outlines the science of baby sleep and how to conquer it. The SNOO is an extension of his studies.

The SNOO has been scientifically proven to improve and increase the length of your baby’s sleep. It’s no wonder this bassinet works since it has been backed by scientific research.

The SNOO’s unique motion and patented swaddle system are two of the main reasons for its success. The motion is similar to what the baby feels in the womb and the swaddle connects to the bassinet so your child will always remain on his back.

The SNOO also connects to your wifi to record all of the night activities and provide parents full control over the easy-to-use app.

Once the SNOO detects your baby crying it will begin its soothing motion and work to get the baby back to sleep for you.

SNOO-parents love to brag about how soon they achieve the first “full night” sleep when using the signature bassinet.

Why I love the SNOO

The SNOO vs Graco sense2snooze comparison

The two bassinets have much in common but still many important differences that you should understand before making your decision of the best smart bassinet for YOUR family.

Let’s take a look at how the SNOO and the Sense2Snooze compare.

The sense2snooze has 3 movement levels and 2 vibration levels. The motion and vibration are controlled from the control panel. The Graco bassinet moves in a “back and forth” direction along the centerline of your baby’s body (head to toe) on the horizontal plane, it does not move up and down.

The SNOO provides several movement levels that you may adjust as you prefer.  When it detects the baby crying, it will start running through each motion, gently rocking the baby back to sleep.

If you’re concerned about your baby rolling in the crib, the swaddling straps will hold him securely on his back.

The Graco bassinet comes with white noise, 10 sleepy songs, and 10 other soothing sounds. These are nice-to-have features but in my opinion white noise is more than sufficient to soothe babies.

The SNOO smart sleeper provides five levels of white noise to soothe tired babies. The level and intensity are fully adjustable from the app. If your baby soothes better with softer sounds, turn the volume down. When the SNOO goes off automatically, it will cycle through the settings.

The Snese2Snooze bassinet does not have any app connectivity.

The SNOO’s app allows for easy monitoring of your baby’s sleep patterns and records each wake-up and motion of the bassinet. It’s an advanced app for a refined product.

The Graco Snese2Snooze has a microphone and algorithm that detects your baby’s cry. Once it detects the cry it starts a series of motion, vibration, and sounds to help soothe your baby back to sleep.

The SNOO detects your baby’s cry and instantly springs into gear, which can save you many sleepless nights. When your baby starts fussing, the SNOO plays white noise and starts to rock the cradle.

The Snese2Snooze smart bassinet has a weight limit of 20lbs. It also warns that your baby should stop using the bassinet once it can roll over on his own or pull himself up.

The weight and age limits for the SNOO is 6 months or 25 pounds. Happiest Baby warns that their bassinets are not designed for babies that are able to sit up on their own.

The sense2snooze or the SNOO smart bassinet – Which one is best?

There is no doubt in my mind that the SNOO is still the best smart bassinet today. The only hesitation I (and many other parents) have is the price tag. At $1400 the SNOO can make it hard for many parents on a budget to afford this amazing bassinet.

Happiest Baby offers a SNOO rental program that can make it much cheaper for families to bring the SNOO home. You can rent the SNOO for a few months without the full price commitment of owning one. Check out my SNOO rental review to find out more about the SNOO rental program or go directly to the Happiest baby website and price it out for yourself.

So how does the Graco Sense2Snooze fit into this picture? One word – value.

Offering many similar features as the SNOO at a fraction of the price, the Sense2Snooze is a great option for parents on a budget that want to take advantage of smart bassinet benefits.

With features like cry detection and variable motion speeds, the Sense2Snooze offers a ton of value for the price.

Overall, the SNOO is not only more stylish and better built than the Sense2Snooze, but it also comes with tested, scientifically proven baby sleep technology. Parents that own the SNOO can rest assured they are getting the best technology and support.

In conclusion, both of these smart bassinets are awesome and do exactly what theta advertise – they help soothe your baby back to sleep without (or with less) parent intervention. Now all you have to do is pick the one that best fits your needs and starts enjoying longer sleep stretches. 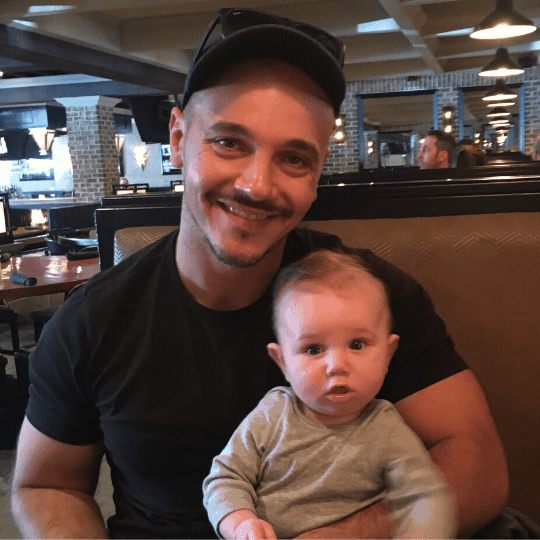 Paulo is a passionate dad who founded Upside Dad to share his parenting journey with other new parents. He graduated from Concordia University and worked as a test engineer for over a decade. Paulo loves dad jokes and craft beer.
Learn more about Paulo and Upside Dad here.