As an Amazon affiliate I earn commissions from qualifying purchases. 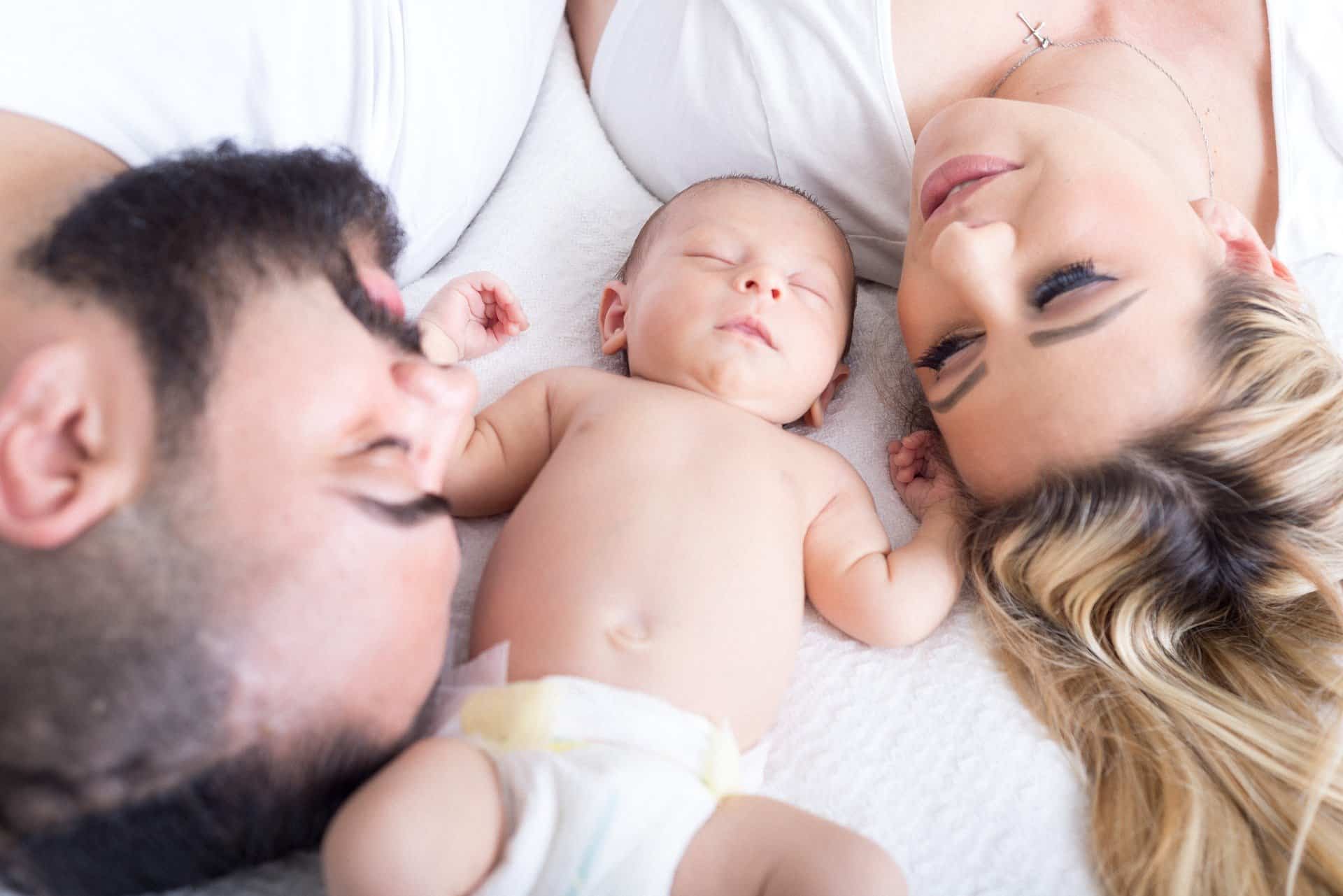 The Reality of Newborn Sleep

When our son was six weeks old, he started sleeping through the night. It was the most amazing feeling, but it wasn’t by accident. At the five week mark we were exhausted. We hadn’t slept more than 1 to 2 hours at a time since he was born and we were at our wits end.

After a many hours of research and more than a few failed attempts, we thought we had it figured out. We consistently applied and implemented these new techniques we had learned for a few nights and the results were beyond belief!

At that point we thought we had conquered a massive obstacle and we could live in the bliss of being a well-rested new family. Then, it happened. Shortly after he turned three months old he started waking up again. The first night we thought it was just an off-night, but then it happened again and again… What happened??

I often found myself searching for answers, looking for a reason why this was happening. Was it something we did during the day? Was it the temperature in the room? His clothes? Did I snore too loud?

Pacing back and forth trying to get my baby back to sleep became the norm for a few days. I became proficient at walking in the dark, holding a baby and looking at my phone reading articles upon articles about how much sleep a three-month-old baby should get. It all came down to just a few helpful pieces of advice I’d like to share with all of the other sleep-deprived parents out there.

With babies- there really isn’t ever a definitive answer to that question. Baby sleep is not linear.

Technically speaking, experts will say that babies will sleep an average of 14-16 hours per day. Numbers like these can scare any parent that struggles with their baby sleeping and napping and they scared me too.

Even on his best sleeping days he wasn’t hitting those numbers, forget about it now. Night sleep was no longer uninterrupted and it could take over an hour to get him back to sleep. Napping was also a struggle as it appeared he was getting distracted by anything and everything.

The thing is, there is not a specific time or schedule they like to keep to, so there’s no way of knowing when you will finally catch a few Z’s. According to Stanford Children’s Heath, a three-month-old baby should get about 9-10 hours of sleep per night with around 4-5 hours of sleep throughout the day. This can be divided up into a few longer chunks or several short naps.

While this offers a ball-park idea of how much sleep your baby should be getting, it doesn’t tell you how many times he’ll wake up through the night or why- and that’s what makes you so tired. So, what keeps waking him up?

Why Do Babies Wake Up at Night?

There are many reasons babies wake up throughout the night, and a lot of it depends on your baby and their internal and external conditions at the time. Some of them are so obvious they are easily overlooked.

My mom told me a story about my cousin’s sleep struggles a while back; he would cry and wake up constantly throughout the night and would not stay asleep. One night, my grandma went in to get him and realized that he was freezing. You see, for whatever reason my aunt would dress him in only a onesie at bed time in December. They changed him into some warmer pajamas and off to sleep he went.

Besides temperature, there are still several reasons for babies to wake up at night. Some experts list the most common causes as negative sleep associations, fitful (restless) sleep, teething, and sleep regressions.

Other factors can come into play of course: light, hunger, wet diapers, too much noise, too quiet. Just about anything can wake up a baby. Sometimes there isn’t really a distinguishable cause, they just wake up. Sleep regressions however, that is something we should discuss.

I’ll admit- I didn’t believe sleep regressions were real. I was so wrong.

The four-month sleep regression hit us at about three and a half months, and it hit us hard. Following some major changes we had made at about five weeks, our baby started sleeping like an angel, all night, every night! That is until we hit this wall.

As I discovered, not only can the regression appear before or after the four months mark, they can also last days or weeks. Some sleep experts say this regression is caused partially by a babies newfound awareness of the world around them.

The best way I have ever heard it explained is that it’s like trying to sleep the night before your wedding or a big vacation- the excitement of learning and experiencing new things keeps them awake.

In our case like with most who encounter the dreaded sleep regression, there are other signs that come along with this new-found affinity for night wakings. Everything becomes a distraction.

Forget about watching TV during feedings, all the baby wants to do now is look at the TV and the beautiful colors on the screen. Or, if my wife tried to eat while she nursed he would stop, unlatch and stare at her. He also started noticing our dog and pretty much anything else that moved around him.

We also know that their sleep patterns are changing (maturing) during this time, which means their sleep cycles are shortened and they spend more time in the light phase of sleep. Check out our custom chart below showing how you can expect their night sleep to go:

The figure above shows an example of how babies in this stage go through their sleep cycles. The point to note is that they spend alot of time in the light sleep and REM sleep phases, meaning they can easily be awaken.

There are many factors and conditions that can contribute to night wakings. Things like sunlight or noise that were once not an issue, can now cause a wake-up much more easily. Knowing is half the battle, so eliminate factors that could contribute to an unwanted wake up!

In general, the 3 to 5 months period can be very tough for parents, especially ones that had babies sleeping very well before the sleep regression hit. As with everything related to babies, this is just a phase but one we want to end as soon as possible. There are actually many things that can be done to aleviate the wake ups and ensure parents don’t go crazy!

How to Improve Baby (and Parent) Sleep During the Regression

The simplest advice can make the biggest difference when it comes to sleep. Here’s a quick list of tips I found to the most helpful:

Every Baby is Different

As you get to know your baby, you’ll be able to learn the little idiosyncrasies that are unique to him or her. For example, everything you read about putting your baby to sleep these days says to put them down while they are still awake- just drowsy enough that they are about to nod off.

This technique is essential in training your baby to fall asleep on his own, however if you are in the middle of a dreaded sleep regression phase and this does not work, just do whatever it takes to get him to sleep. Bop him, shush him, let him fall asleep on you, whatever it takes. This is not the time to try new tricks, it’s survival!

Follow you gut. Your dad instincts are the most valuable tool you have, so listen to them even if it goes against some of your research. Try out different approaches. As long as your baby is happy, healthy, and safe it will be ok, and that’s a big part of them sleeping.

When I finally broke down and asked the pediatrician when babies can be expected to sleep through the night, I was a little disheartened by his answer. I have to wait until he’s a year old?!

After getting caught up in everything I had read about “how much should a 3-month-old sleep?” and “3-month-old baby milestones” that was definitely not what I wanted to hear. It was then that I realized that what helped my frustration and anxiety the most was understanding that all of this stress was normal.

They’re just babies, their sleep patterns are changing around the three to four month mark. What some people call a regression, others call it a PROgression. The sleep progression means that when they are through, they will have reached their adult sleep pattern and will more easily fall asleep and stay asleep.

“Remember: Everything is a phase.”

Remember: Everything is a phase! When I finally accepted this and lowered my expectations down to a more realistic level, we both got more sleep. My stress level was part of what made it so hard for him to sleep. Babies are extremely sensitive to your stress, remaining calm is the best thing you can do.

Remember that as his parent- YOU will know what’s best. Don’t doubt yourself. It takes some trial and error which is terrifying when it comes to raising a baby but you will figure out what works best for you and your baby and that’s all the matters.

As tough as it is to wake up multiple time per night- take the time to listen to his breath, feel his heartbeat and let yourself become as peaceful and relaxed as you’re trying to make him. Give him something calm and peaceful to feed off of and watch him drift off to sleep.